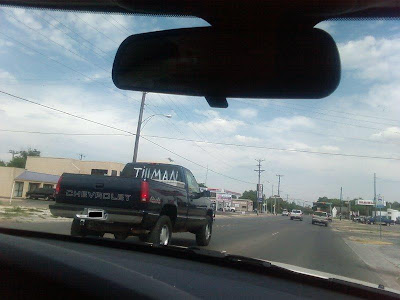 This may be a tribute to the late Pat TIllMAN, who left his career as a football player to join the army and fight in the war in Afghanistan. He might be less flattered if he could see how his name was written on the back windshield of this truck that Stephanni in Abilene, TX caught, with the confusing array of long lines that looks like the Roman numeral III. Even the little dot on the i, which seems more like an afterthought, does not help very much.
Posted by William Levin at 11:54 AM

I think he forgot the \ in his "N" and he's actually the TINMAN.

In the Texas version, the Tinman wishes for, and gets, a full-sized Chevy pick-up.

I just literally laughed out loud at your tagline--hilarious!

No, I think he is celebrating that he finally Bought Terminator 3 on HDDVD. That was an awesome movie.