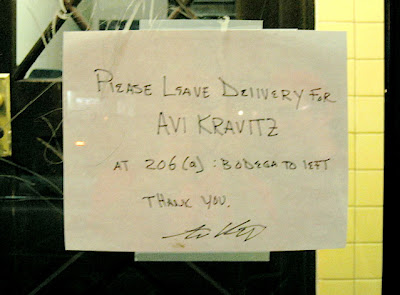 A few months ago I discovered this DElIVERARY note here on 7th Avenue in Park Slope, Brooklyn, arguably one of the best and most bizarre examples of lowercase L misuse to appear on this blog. Well, the author of the original note has struck again, and it looks like old handwriting habits are hard to break. If Avi writes his own signs, at least he has learned how to spell DElIVERY correctly since his last note. But, unfortunately, he still hasn't realized just how inappropriate it is to place a lowercase L next to all uppercase letters, especially an uppercase i. I'm willing to give him the benefit of the doubt, though, if it turns out his name is really AVL KRAVLTZ.
Posted by William Levin at 2:11 PM 1 comment: 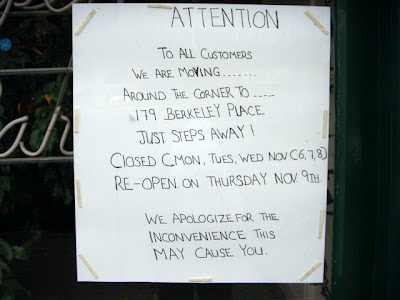 I don't think I'll be venturing around the corner to see what they have in store.
Posted by William Levin at 9:58 PM 1 comment: 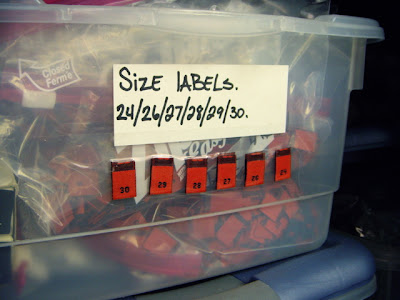 It's not nice to label, but it's even more not nice to write lABELS with a confusing lowercase L. This is another interesting case in which a single word contains two L's, one uppercase and one lowercase. It would make slightly more sense if the uppercase L started the word. and the lowercase L was placed second. What happened here? Did the lABEL maker realize his mistake midway through and try to redeem himself with an uppercase L?
Posted by William Levin at 11:09 AM No comments: 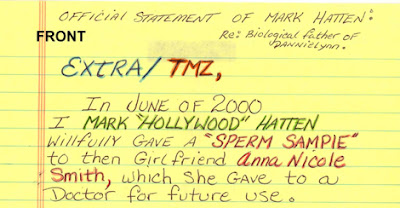 By now you have been inundated with news about the untimely demise of model and reality tv star Anna Nicole Smith. But what you may not have known is that even a scandal in the wind such as this is suseptible to the lowercase L phenomenon. Mike G. submits this fine example of awkward lowercase L usage in current events, an outstanding occurrence worthy of the tabloid pages on its own.

Found on IDontLikeYouInThatWay.com, the first, best, and most shocking offense in this handwritten prison letter from Mark "HOllYWOOD" Hatten is the willfully given "SPERM SAMPlE", splashed on the yellow stationary (seen above) for us to soak in. Further down in the letter is the less offensive "HOllYWOOD", not as confusing because there is some variation in the height of the capital letters. Finally, at the bottom of the letter, we are treated to a double whammy with the request to "PlEASE CONTACT: ATTORNEY AT LAW, PAUl F. FEGEN" (click image on right to see full size).

I don't understand much about the laws surrounding custody of Anna Nicole's baby, but at least now I understand why this guy is behind bars.
Posted by William Levin at 8:36 PM 1 comment: 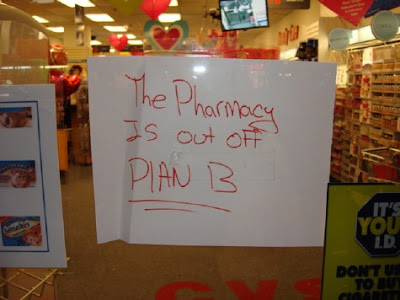 Local lowercase L scout Jennifer S. found this eerie example on the popular Manhattan news and gossip site, Gawker. Jennifer was reluctant to send this photo in, assuming that hundreds of people would have already done the same. But so far she is the first and only.

So "The Pharmacy Is out off PlAN B". More importantly, do we have a PlAN L, for the day when these lowercase lechers have entrenched themselves so deeply in sign writing culture that the fine line between uppercase i and lowercase L becomes blurred to the point of CASE CHAOS?! Now I'm upset that the pharamcy has no more morning after pills, because, at the very least, those little poppers could prevent a whole new generation of lowercase L violators from ever being born.
Posted by William Levin at 11:11 AM 3 comments: 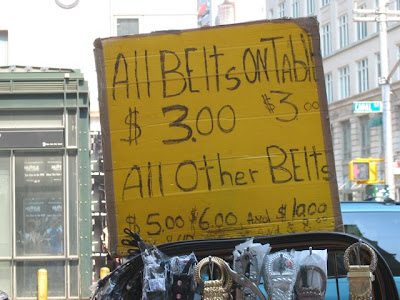 My buddy Berger Boy sent this to me a while ago, but I didn't post it because it doesn't quite fit the requirements for a perfect lowercase L sighting. But after giving it some more thought, I decided to share this one with you because of its uniqueness. Notice the nonsensical yet consistent styling of BElts, beginning with capitals B and E, and cascading down with lowercase "lts". I'm not sure what to make of this from both a stylistic and psychological standpoint. Did the auther suddenly forget that he was writing BELTS in uppercase letters? He obviously knows how to construct uppercase T's, as in "Table", and he can also do a nice lowercase "e" as with "Other". Is he tightening the BElts to fit into this sign? Maybe you can help solve this mystery.
Posted by William Levin at 6:05 PM 2 comments: 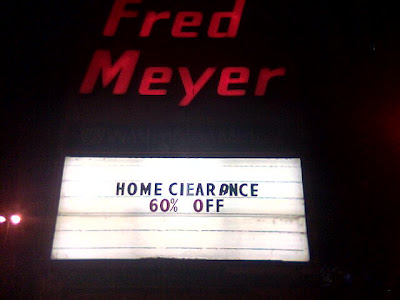 Another submission from contributor, Jeremy D., in Springfield, Oregon, this Fred Meyer" marquee is proof that the lowercase L phenomenon can manifest itself in formats other than handwriting. While it is unclear whether the sign master had run out of uppercase L's, we can exclude the possibility that this violation was a result of letter ClEARANCE, as there is plenty of space on both sides of the text. Surprisingly, I couldn't find any information about this on the Fred Meyer FAQs web page, but if you would like to take a role in saving humanity, put down your global warming petitions and leave a comment for Fred Meyer, letting him know how poorly this insane signage reflects on his business.
Posted by William Levin at 1:04 PM 3 comments: