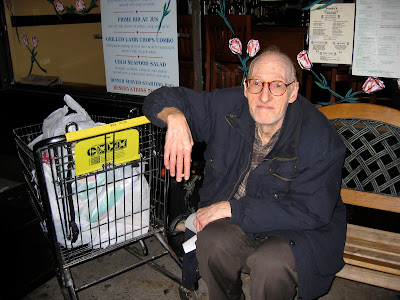 Fellow Park Slope residents might remember Robert Schindler, known to most as Bob, the bespectacled old coot and occasional panhandler ("Pardon me, can you spare some change?") who could often be found sitting on a milk crate in front of the Starbucks on 7th Ave, entertaining passersby with his Mae West impressions and musings on the human condition as he chain smoked Maverick Menthol Box 100's. He died in a hospital last week, 12/23/10 of congestive heart failure. He was 76 years old.

I came to be friends with Bob, an NYC native Park Slope resident of 50 years, in 2004, when, once a week, I started helping him carry groceries up to his fourth floor single bedroom apartment on Garfield. Crippled from a severe inguinal hernia that went untreated in the 1980's, Bob wasn't always that hunched over panhandler who took frequent sitting breaks on milk crates in the middle of the aisles while grocery shopping at Key Food. In his glory days, Bob was an audio technician, and sold hi-fi stereo systems for Sam Goody. He was an avid appreciator of classical music, and had an extensive collection on vintage reel-to-reel tape. And you wouldn't know it if you saw the gaunt, wispy white haired man with his huddled, shuffling gate, but Bob stood over six feet tall, and was a fiery redhead.

In the last few months, Bob's health declined and he stopped going outside. I'd do his grocery shopping for him — his diet consisted largely of Utz Onion and Garlic Flavored Potato Chips (never Wise, they have the highest brown spot ratio of all the chip brands), green bananas, and sour cream. After he took a nasty fall in his apartment, I visited him at New York Methodist Hospital. He was full of self-pity, but cracked a toothless smile when I introduced him to my new wife. "You're a midget!" he exclaimed after looking Malya up and down, all 5 feet of her. "But she's very pretty", he said to me, aside, as if Malya couldn't hear.

The day before he died, Bob called me to complain, lamenting that he didn't want to be in the hospital anymore. I could hear the life leaving him, and I knew he couldn't come home. Desperate, Bob begged me to spring him from that joint, any way I could. I spoke to the administrators to see if they would authorize his release, but in his condition it wasn't going to happen. 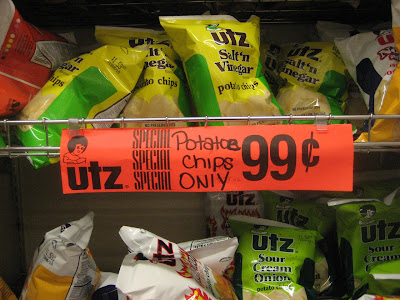