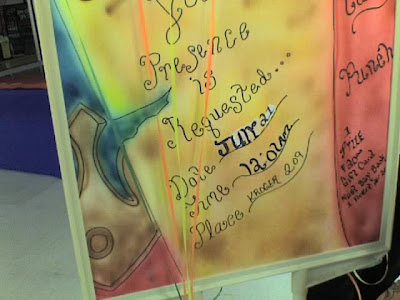 In the wake of the latest Harry Potter book release, lowercase L reader Lindsey submits this fine work of wizardry.

I was at a midnight Harry Potter party at a Kroger grocery store in Texas, and I HAD to take a picture of the sign. Looks like it took them two tries to get "JUlY" wrong. But, the people in charge of selling the books weren't too bright to begin with - they were planning on having a raffle drawing at 1 am, because they figured people would want to stick around and have the party AFTER they had already bought the book. Yeah. Not much thought went into that one.

Posted by William Levin at 2:16 PM

He, he...good one! I love that someone put extra effort into creating fancy letters and still fucked up.

lol your blog is fantastic and hilarious...this is an EXCEllENT BlOG lol...

It looks like they started to write JUN and then adapted it to JUIY.