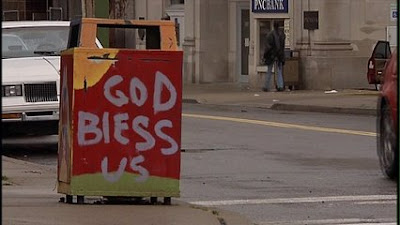 Over the weekend here in NYC, Rooftop Films showcased New Muslim Cool, a documentary film about Puerto Rican American rapper Hamza Pérez and his journey from drug dealer to religious Muslim. The movie, directed by Jennifer Maytorena Taylor, is getting impressive international recognition, and is even being featured on POV on PBS. But would the film be getting this much attention if it had not been for this production still of the words GOD BlESS US written with all uppercase letters — except for the L — in graffiti on a public trash can in the North Side of Pittsburgh?

This is not the first case of a graffiti BlESS!
Posted by William Levin at 11:12 PM