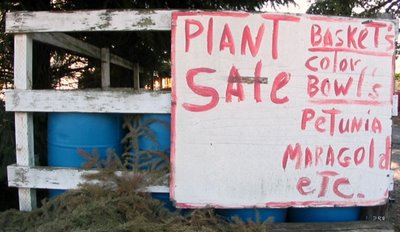 Jeff G. returns with another fine submission, and explains that both of his PlANTS were found in Salem, Oregon. In addition to the obvious L misprint, this sign has some other fascinating case choices, like the magestic uppercase T's that loom over all the other letters; and the rest of the lowercase L's, all of which happen to be the second to last letter in their words—SAle, BOWl's (oh, snap! I smell an Apostrophe Catastrophe cross-post!), and MARAGOld. Notice these three words are composed entirely of uppercase letters, except for the L and adjacent last letter. What happened here? Is there something about the L that makes people forget they were writing in the uppercase? And when they hit the L, it's all downcase from there?

Either way, we finally have proof that the lowercase L phenomenon reaches far beyond the east coast. Just how far does it reach? Check in next week for the answer.
Posted by William Levin at 1:32 AM

"[...]like the magestic uppercase T's that loom over all the other letters; and the rest of the lowercase L's"

Isn't this an apostrophe catastrophe of its own?

No, pdberger, there is no apostrophe catastrophe in T's. According to Dictionary.com Word FAQs:

The apostrophe is used for plurals of letter abbreviations with periods and single letters, e.g., p's and q's; two A's and four B's.