NOTE: The following images are NOT REAl 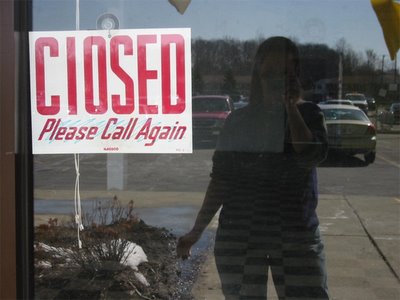 In response to Berger's post, which features a lowercase L sighting of questionable authenticity, we received this letter from Adam Wells, Leeds mate and special effects guru from the UK:

[..] The 'artist' is clearly not a consistent lowercase "l" offender, 'MAPLE SYRUP' escapes.

Secondly, and more notably, unlike other examples displayed on the site, the "l" has not been squeezed in to its designated space; there is ample room left which suggests to me that the horizontal has been painted out in an attempt to join the dysgraphia gang - or simply undermine the important and relevant research of Mr Levin.

My main concern however, surrounds the fact that of all the important issues raised by EINY, this one has caused my lengthiest and hard-thought response. BOllOCKS. 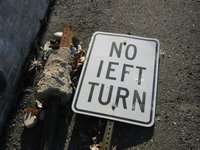 Adam also included the three photos in this post, click them to see larger versions. I was amazed at the quality of these lowercase L sightings. "ClOSED" looks real enough, but the other two made me suspicious. I asked Adam about it, and he replied: 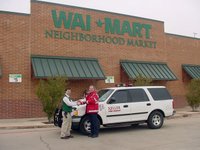 "Unfortunately, you should be suspicious of them all. To back up my suspicions about the 'maple syrup' image on your site, I thought I'd illustrate a few forgeries for myself. Still on the lookout for genuine ones though, in an effort to oust these despicable people!"

Under normal circumstances I would never knowingly post fake lowercase L's on this site. But the examples that Wells submits are so well done that I felt I must showcase them here. I think we can all learn a lesson from this. Trust no one.
Posted by William Levin at 4:57 PM

The last picture would have been even better, had the writing on the side of the car also contained the infamous lOWERCASE l.
Those were good pictures, though.