AT lEAST IT WAS mostly uppercase 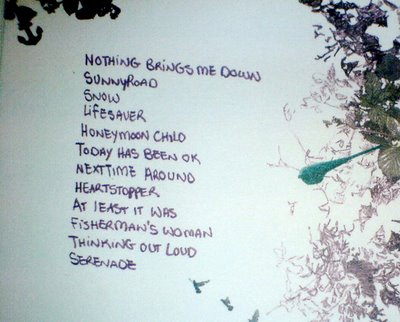 Sent in by Shep, our man on the field in the UK, this may be the first example of an inappropriate lowercase L that has actually been published and circulated. Look at track #9, AT lEAST IT WAS. You may be Thinking Out Loud, "Nothing Brings Me Down ... except an errant lowercase L!" In Shep's own words,

Just when I was despairing of ever finding a single example, along come two in almost as many weeks…

So, hot on the heels of the Williamsburg ‘PlEASE TAKE WHAT YOU WANT’ find, see attached photos of the sleeve of Emiliana Torrini’s cd ‘Fisherman’s Woman’ (released a couple of years ago, at least in the UK).

Slightly mystified as to the how and why this has happened (it’s repeated in the inner sleeve), but I can see at lEAST one oddity here…

I wouldn't be surprised if Emiliana Torrini sees a massive RECAll of her album. Serves her right. I bet she'll be more careful Next Time Around
Posted by William Levin at 1:38 AM

Email ThisBlogThis!Share to TwitterShare to FacebookShare to Pinterest
Labels: music