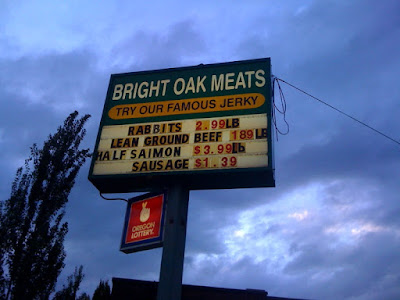 Bright Oak Meats may be known for their famous jerky, as is evident by their jerky display on this Springfield, Oregon roadside sign, photographed by regular contributor Jeremy D.  Are they referring to a HALF SAlMON fillet, or lopping off half of the letter L when spelling SAlMON?  I never thought I'd say this, but I think I'll play it safe and go with the rabbits instead.
Posted by William Levin at 10:11 AM 1 comment: 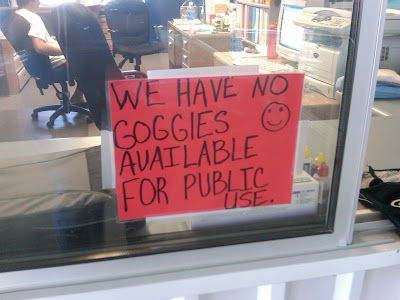 Don't mock us with that smiley face, Public Pool in Williams, Arizona. Confusingly placed lowercase L discoverer, Robin D, doesn't want your stinking GOGGlES anyway. Was there a three-L limit on this sign or something?
Posted by William Levin at 11:26 PM No comments: 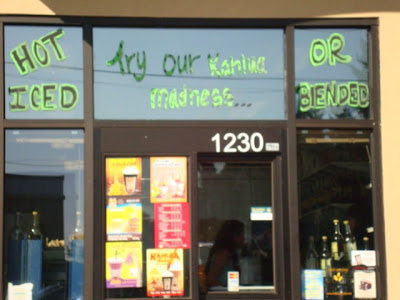 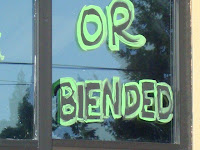 HOT, ICED, OR BlENDED are my choices at The Human Bean espresso drive-up.  Holly J. submits this photo from Roseburg, Oregon.  This could be a crunch case, where lopping off the leg of an uppercase L was the only way to fit the word in the window.  Or it could be the onset of Kahlua madness!
Posted by William Levin at 9:00 PM No comments: 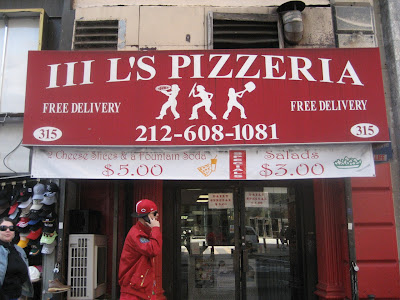 Not a lowercase L offense at all, I just thought III L's Pizzeria might like to sponsor my blog.
Posted by William Levin at 9:12 AM No comments: 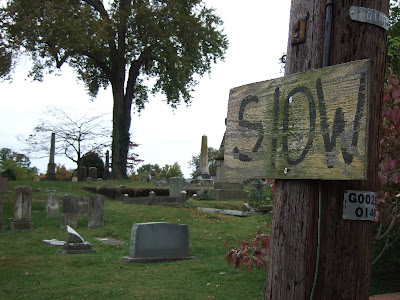 Doesn't get much slower than dead.  Not sure if this SlOW sign is referring to traffic or the person who wrote the very same SlOW sign, but this cemetery in Charlottesville, VA, photographed by Scott G. makes me want to speed up to get out of there quicker.
Posted by William Levin at 2:48 PM No comments: 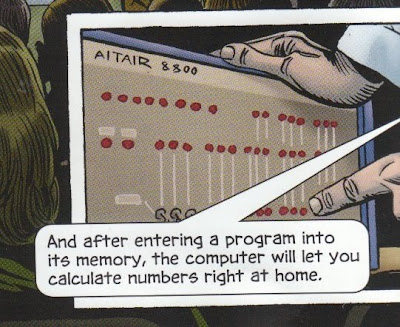 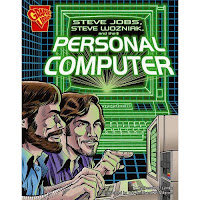 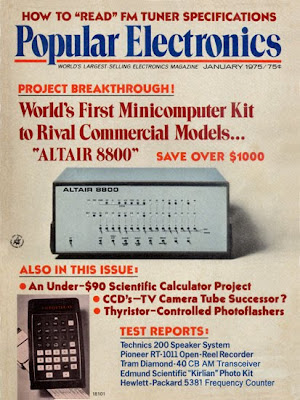 Posted by William Levin at 12:44 AM No comments: 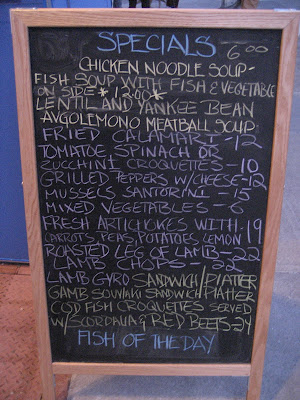 So many choices! The lowercase L in PlATTER almost went unnoticed on the lower right corner of this menu board in front of Santorini Grill, a mediocre Greek restaurant in Williamsburg, Brooklyn.  But, based on my previous experience with Greek restaurants, I knew I'd find the lowercase L offense eventually.
Posted by William Levin at 4:12 PM No comments: 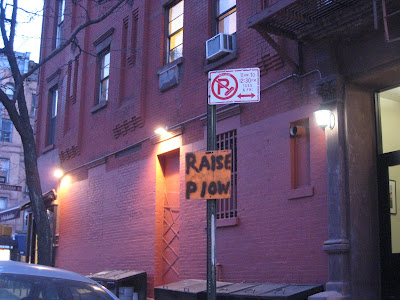 Sweet MAlYA couldn't believe it when she learned she had been passing by this sign, unnoticed, on the Upper West Side of Manhattan nearly every day of the winter ... while going out with Mr. lowercase L himself (me!)  This warning to trucks, advising them to RAISE PlOW, would have been less confusing if the OW — both letters that are the same in both upper and lowercase form — were bottom justified instead of top justified to the lowercase L.  That might explain the metal scraping Malya heard out her window all winter long.
Posted by William Levin at 12:01 AM 1 comment: 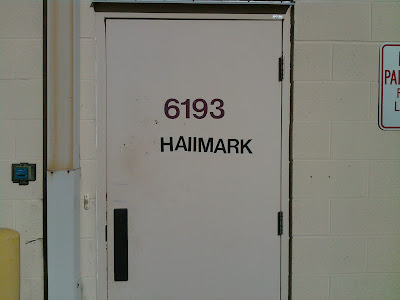 What is a HAllMARK of excellence?  It certainly isn't the lettering on this door.  Vincent explains his astonishing discovery:


My son and I were taking our recycling materials to the collection center behind a local strip mall in Canal Winchester, OH. I noticed this back door to the HAIIMARK store. I asked my son to handle unloading the recyclables, because I had to snap a picture of this horror. A man's gotta have his priorities.

More like a hall MAR if you ask me.
Posted by William Levin at 8:00 AM No comments: 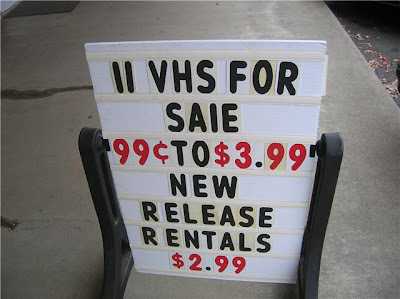 Oh, Rimpy, how do you find so many improperly used lowercase L's?  Rimpy explains for this classic SAlE sample:

There was supposed to be an A at the beginning of the first line, but it must have fallen off. The other side of the sign said basically the same thing, plus the name of the business (ALL THE BEST VIDEO), with all uppercase Ls in their proper form. I guess this depleted their store of uppercase Ls, and they had to resort to the old uppercase I for L trick for the other side.

Posted by William Levin at 9:30 AM No comments: 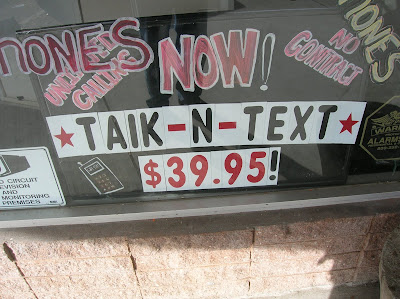 Rimpy Rimpington strikes again, but this time not from a Home Depot.  The person who arranged the individual letter pieces in this window display may have tried to TAlK-N-TEXT at the same time, apparently to no avail.  He also came dangerously close to a double lowercase L situation with the handwritten UNLIMITED CALLING on the top left portion of the sign, but managed to squeeze in a bit of the lower legs on the L's.
Posted by William Levin at 10:29 PM No comments: 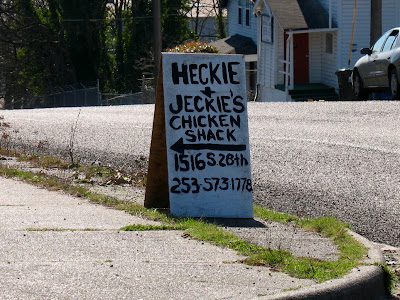 Sean of the Eff-Stop Local photo blog was taken aback when he noticed this HECKlE & JECKlE'S Chicken Shack sign while tooling around Tacoma, Washington.  You may recall Heckle and Jeckle, the mischievous pair of magpies for whom our Chicken Shack owner named his fine restaurant.  Perhaps it was in the spirit of these crazy cartoon birds' reckless abandon that the author of the sign chose to write in all capital letters, except, of course, for the lowercase L's.  Or maybe it's just as I've always suspected — the world is coming to an end.
Posted by William Levin at 2:53 AM 3 comments: 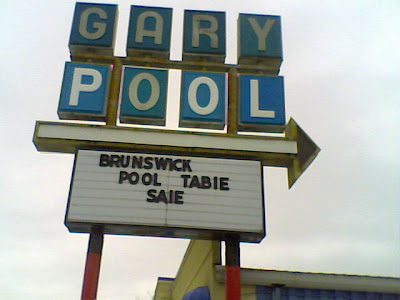 I spotted this one on Niagara Falls Boulevard in Amherst, NY.  In the summer this business sells swimming pools and during the winter they turn to indoor entertainment items such as pool tables.

Seems that Gary is short on uppercase L's for his readerboard.
Posted by William Levin at 9:52 AM No comments: 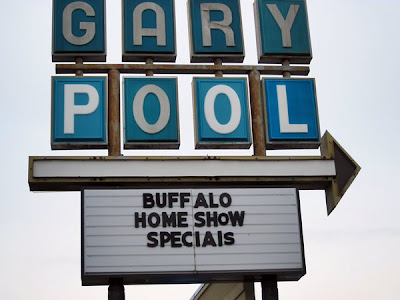 Trying to get back into the swing of posting more regularly, I was encouraged by Randy C of Cheektowaga, NY, to post more frequently.  He tells his tale:

I spotted this one on Niagara Falls Boulevard in Amherst, NY, soon after the Buffalo Home and Garden Show.  Of secondary interest is the lower case "o" in the word "show."

I pass this business three times a week and have gotten so I always check out their sign.  Is this just a clever way to get people to notice their business?

Just for fun, I've included a second photo to place the sign in context. 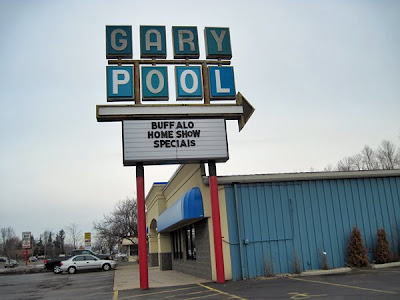 Not the SPECIAl on this blog.  Also reminds me of a POOl or two.
Posted by William Levin at 11:50 PM No comments: